Even if you aren?t sure what an alternator is, most drivers know it?s a necessary component needed to keep their vehicles running. When the alternator goes, cars won?t start leaving drivers stranded wherever they last parked.

Like many engine parts, when the motor won?t turn over it doesn?t always mean you have to buy a new one. While in some cases you will have to spend money on parts and probably labor, sometimes it?s a quick, easy, and inexpensive fix. To help you know if it needs to be replaced and how much it?ll cost, here?s everything you need to know about alternators.

What is an Alternator

You?ll find the alternator on the engine and its primary job is to continually provide power to the vehicle?s battery, computer, and electrical system. While the battery is necessary to start the engine, the alternator is the part that keeps it running.

Alternators are designed to last for years, typically around seven. Most can handle mileage up to and even over 100,000 miles but some may go out before the odometer reaches 60,000. How long an alternator lasts will depend on driving conditions, quality of the part, along with how many electronics are being used in the vehicle.

How to Know When an Alternator is Failing 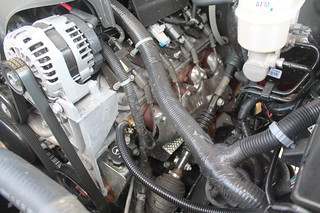 There are usually signs that indicate an alternator is starting to fail. If you catch it earlier enough, you can have it replaced before your car won?t start. Here are 6 signs to watch out for.

On the dashboard, there is a panel where warning lights appear. Sometimes referred to as ?idiot lights?, when one comes on you need to pay attention. When a light titled ?GEN? or ?ALT? comes on it?s a clear warning your alternator is going bad. Even if you aren?t noticing any other signs, you still want to take your vehicle into a certified auto shop for an inspection.

Your vehicle?s headlights are part of the electrical system powered by the alternator. When the alternator is starting to fail, it often causes the headlights to flicker or dim without being manually adjusted.

Part of the alternator?s job is to supply power to the vehicle?s electrical systems. This includes,

If your dashboard goes dark and your windows won?t roll down chances are it?s the alternator and not a low battery if the engine will still start. However, you might still want to check to see if the battery is fully charged, the cables are connected, and there aren?t any signs of corrosion on or around the terminals.

Unless you?re a trained mechanic trying to separate ?strange? sounds from the ones your vehicle usually makes can be frustrating. If you took your car to the mechanic every time there?s was a rattle or other odd noise the bills will start getting expensive.

If you do hear a rattling sound coming from the engine, this can indicate that your alternator is ?on its way out the door.?

You don?t have to own a hybrid to have an automobile that runs on gasoline and electricity. If you have headlights, power windows, or even lights on the dashboard, your engine needs both gas and electric power.

Without an alternator, power wouldn?t reach the spark plugs which are responsible for igniting the gas in the engine. When the alternator is supplying enough power, engines can stall or have difficulty starting. If you ignore it for too long eventually your car won?t start, even with a fully charged battery and full tank of gas.

If you find yourself constantly replacing your car battery, the alternator might be draining it. You can keep replacing the battery. Most come with limited warranties so it might even be free the first couple of times. However, eventually, the alternator will fail and even a new battery won?t be enough to get or keep your vehicle running.

Instead, you?ve wasted time and money concentrating on the battery. Batteries can go bad, often due to a manufacturing defect, and this is why new ones typically come with warranties. If you have to replace the battery more than once in a few days or weeks, it?s probably the alternator that?s causing the problem.

Tips on Maintaining Your Alternator

Even though it?s inevitable, your alternator will eventually fail due to wear and tear. There are some things you can do to ensure it lasts for years.

No matter how careful you are, even top-rated alternators eventually give out and need to be replaced.

How Much Do Alternators Cost

The cost for an alternative depends on the brand, and if you are having a certified mechanic install it. Unless you are confident that you can install it correctly, it?s best to take your vehicle to a professional.

Not only will you get a manufacturer?s warranty for the part, but also one for the labor. If something goes wrong, within the warranties timeframe, you won?t have to pay out of pocket to get it fixed or replaced.

Without an alternator, your vehicle isn?t going anywhere, unless it?s on a tow truck. The small part plays an important role and you must pay attention to any warning signs that may indicate it?s starting to go.

While you can change the alternator yourself, it?s always best to go to an ASE certified mechanic. You?ll know that the job was done right, and you?ll also have a warranty if something does go wrong.