This particular model is required to be hardwired into your car?s power supply rather than using an adapter such as one that hooks up to the cigarette lighter or USB port. If you are not handy with electrical wiring, this may require a professional installation. Additional concerns with this unit include issues with the memory filling up and even after clearing the system, the camera reports it is still full. Consumers also complained that it downloads firmware without user permission and if you inadvertently power the unit while it is updating you can brick the unit.

The major pro of this unit is all the additional functionality it has. The built-in Wi-Fi allows for direct connection to your smart phone and various recording modes. The fact that is has two cameras that can record both the front and back of your vehicle is a major plus for driver protection against fraudulent claims. An additional feature this model has is motion detection when in park to record incidents to your vehicle when not in motion. While this model does require hardwiring into the vehicle?s power supply, it comes with an OBD II port converter so you do not have to fiddle with internal wiring.

A nice built-in safety feature of this model is that the screen blacks out when it detects the car moving to avoid driver distraction. The built-in GPS is capable of recording speed and location information to overlay within the video metadata. The MiVue?s built-in Wi-Fi also makes video footage transfer super easy with a smart phone.

This model has excellent audio features that other models do not have and also includes the built-in G-sensor functionality that saves important incident footage. Garmin also has recording software that can be downloaded on to your computer that allows for reviewing of dash cam footage. Since the Garmin comes equipped with GPS, the unit has a speed limit warning ability and it beeps to capture the driver?s attention to slow down.

This model has several notable complaints against it. It does not have auto shutdown functionality as other models do and can continuously run which fills up the SD card faster and also drains the vehicle?s battery. Users also noted that it seemed to fail after a few weeks of use, but instead of alerting the driver it was not recording users only discovered it had failed when attempting to playback video. The Wi-Fi video transfer function also appears to take a very long time to send a video to other devices. 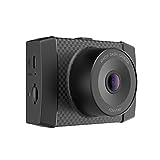