December 9, 2022 Leilani
Home»Informational»Is It Dangerous To Jump Start a Car? Facts vs Myths/ The Truth
Informational

Sometimes it doesn’t matter how careful you are, your car battery can still ‘die’. When this happens, you need to jumpstart your battery. Overall, jump-starting a car battery is relatively safe as long as you take a few safety precautions.

However, some myths can make you think only a professional is qualified to recharge a car battery. To help clear up the confusion, here is the truth about jump-starting a car.

What You Need to Jump Start a Car

You probably already know that jumper cables are essential to charge a car’s battery. You should keep a set in your vehicle at all times. Most batteries don’t fail when the car’s parked in your garage, instead it usually happens when you’re away from home. Along with jumper cables, there are a few other tools you’ll want to have close by so it won’t be dangerous to jump-start the car.

The rubber gloves will protect your hands from accidental shocks, while the safety goggles will prevent battery acid from splashing in your eyes. It should be noted that this is rare but it’s still a good idea to be protected.

A wire brush is used to wipe off the white powder that can collect on battery terminals. The powder is corrosive and you don’t want to touch it with your bare hands. A portable battery charger will jump your car without the need for another vehicle. However, if you do need to connect the cables to a second car battery check to ensure the voltages are compatible.

How to Safely Jump Start Your Car

If you don’t follow certain safety steps, it will be dangerous to jump start a car battery. Here are a few tips to help you stay safe. The first step is to read the vehicle’s owner’s manual. There will be a section on the car’s battery that will include how and where to attach the jumper cables.

The newer model vehicle typically has lugs where the jumper cables attach, instead of directly on the battery. It’s a safer way to charge the battery but the lugs can be difficult to find if you don’t know what to look for.

Just by following these simple steps, you can safely charge a car battery without having to call a professional.

How Not to Charge a Car Battery 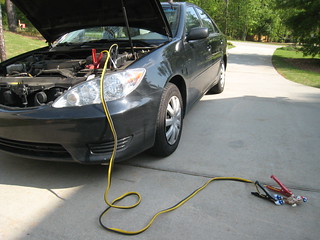 You should always visually inspect the battery case before attaching jumper cables. Any signs of wear and tear are an indicator that it should be replaced instead of charged.

5 Myths About Jump-Starting a Vehicle Debunked

Even with all of the available information, myths persist regarding how to charge a car battery. To help put an end to the misinformation, here are 5 common myths along with the truth.

There is an average lifespan for car batteries but it’s only an estimate and not a guarantee. Some batteries can last for six years or more, while others only hold a charge for 12 to 24 months or less.

How often the vehicle is driven, climate and maintenance will affect how long your car battery lasts. In some cases, the battery brand can also play a role in its lifespan.

Since you don’t have to worry about battery fluid freezing in cold weather, a common myth is it will last longer in warmer climates. This myth is untrue since hotter weather can cause water loss due to evaporation. Heat can also cause the battery case to warp and/or crack.

Your car battery might not always be dead when the red warning light turns on. While it does indicate a car battery could be running low some of the time. It can also signal a problem in the system. Whatever the reason the indicator light is on, it’s a good idea to visit a mechanic and have it checked out.

This can be a dangerous myth, especially if you frequently drive in rural areas. Your car battery will not fully recharge after a jump start, even if you drive around for hours. A jump is only a temporary fix until you can replace or connect the battery to a charger. You’ll want to do this as soon as possible before you’re stuck needing a jump-start again.

It surprises many drivers when they learn the opposite of this myth is true. Your car battery loses power when the vehicle is turned off. This is why cars that have been stored in garages for years often have dead batteries. Batteries do last longer when the car is regularly driven. 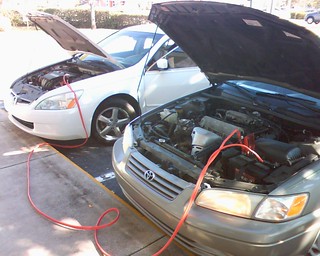 Knowing the truth behind some of the common myths regarding car batteries and safely charging them, will help keep your vehicle turning over every time you put the key in the ignition. However, there will still be times when your engine won’t turn over and if it’s the battery here’s what you should do.

Most jumper cables differentiate the positive and negative ends by color-coding them. Red is positive and black is negative. This helps to prevent the wrong cables from being connected to the batteries. If this happens it can destroy the battery.

You also want to remember to always connect the positive cables to the battery that is dead, and the negative cables to the fully charged battery. If the cables are mixed up, the dead battery will never get a charge.

There are two ways you can finish charging your car battery. One might be faster but the other is safer. Ultimately it’s your choice which method you use.

Whichever method you use, always remember to remove the jumper cables in the reverse order they were put on. For example, you’ll remove the negative ends before the positive.

It can be dangerous to jump-start a car battery if you don’t follow the basic safety tips. However, if you do you can charge your vehicle’s battery without any problems. Just remember to pay attention and you’ll have your car running again in a few minutes.