How to Put a Car on 4 Jack Stands

Working on your own car can be a fun and rewarding experience. More importantly, it can save you a huge amount of money while allowing you to make sure that any repairs done to your car are done correctly. Many repairs and maintenance to your car can be a very straightforward process. Whether you’re changing your oil, rebuilding your brakes, or installing a new fuel pump, a great multitude of jobs can be easily tackled by even inexperienced do-it-yourselfers.

Despite this relative ease, there are still precautions that need to be taken to ensure that you and your vehicle are safe while you work on it. The most important safety precaution that one must take when working on a car is to never be under or near a jacked-up vehicle without placing it on jack-stands.

How to Put a Car on 4 Jack Stands?

Placing a car on jacks-stands is a process that differs slightly for each car. The first question to decide is whether you need the entire car raised or just one end. For many tasks, raising only the front or rear is sufficient to achieve the access you need. The second task is to locate the jacking points of your car. Most manufacturers have specified places along the edge of the frame where you may place a jack without damaging the car. You can look online or in your owner’s manual to find these. Or, if you are unable to look this information up, you can typically locate a sturdy part of the frame with a slight indentation on it. This will most likely be a jacking point.

Once you have located this point, slide the jack underneath the car and lift it to the desired height. Make sure to not get underneath the car at this point. Then, locate another secure area near the jack. This will typically be on the frame, or along the “pinch weld” (the defined crease that runs along the side of the floor under the door.) Carefully slide the jack stand under this point, and lift the jack-stand until it is just below the needed height. Then, using the jack, slowly and carefully lower the car onto the jack-stand, taking care to ensure that the jack-stand does not shift or tilt.

Repeat this process for the other side, and the other end of the car if need be. After you have placed at least two jack stands under the car and removed the jack, shake the car back and forth a little bit. This will make sure that it is securely placed on the stands and that there is little chance of the car falling. At this point, you may commence working under the car.

Things to Look Out For 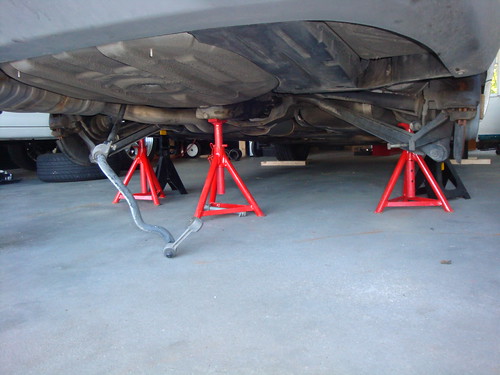 The above process is a generalized procedure, but there are a few precautions to keep in mind. First, make sure the area of the car you are placing the stand under does not have significant rust or any other issue that would potentially affect its structural stability. Further, try to only lift a vehicle on level ground; attempting to place a car on jack-stands on an incline can create a dangerously unstable situation. Finally, make sure that the ground is firm. Of course, concrete is the best surface. However, if you must use jack-stands on gravel or dirt, take extreme care to make sure that the ground is not soft or liable to shifting. Many mechanics find it helpful to place the base of the jack-stands on squares of plywood to increase the foot-print and stability.

It is also important to make sure that the heights of your jack stands are set equally. When lifting a jack stand, there are typically several notches that allow different heights. A helpful trick is to count how many clicks you hear when lifting the stand. Then, simply lift for the same number of clicks on the other stands, and the car should be level.

Always make sure that the jack stands that you are using are properly rated for the car you are supporting. The most common size of jack stand is rated for 5,000 pounds, which is sufficient for most vehicles. However, jack stands are available in much higher capacities for larger or heavier vehicles. When in doubt, it is better to err on the side of getting a heavier-duty model. When considering the weight of your vehicle, remember that the weight distribution may be unequal. Especially on diesel trucks, the front of the vehicle often weighs more than the rear. Thus, simply because your truck is 7,000 pounds does not necessarily mean that the front stands only need to support 3,500 pounds.

As previously mentioned, the process of how to put a car on 4 jack stands will vary depending on the specific vehicle. For example, lifting a vehicle with a solid front or rear axle is often much easier than a vehicle with independent suspensions. To lift a solid axle vehicle and place it on jack-stands, you can simply slide the jack under the center of the differential. Then, once the car is at the proper height, you can place a jack stand under each axle tube.

Further, many cars have a solid cross-member in the front suspension that can make the process of lifting the car a little easier. If your vehicle has a solid cross-member running under or neat the engine, you can most likely use this as a jacking point. This allows you to lift both sides of the car at once, thus reducing the number of steps needed.

How Long Can a Car Stay on Jack Stands?

This question depends somewhat on the situation at hand. Provided that the vehicle is properly placed on the stands and the stands are on solid ground, a vehicle can remain on jack stands indefinitely. In fact, many owners of classic or collector vehicles use jack stands for long-term storage as a means to prevent tires from flat-spotting and to reduce load and wear on suspension components.

If you intend to leave your vehicle on jack stands for an extended period, make sure there is no risk of the stands sinking. Even on asphalt, stands can dig into the ground over time – especially in warm conditions. Thus, this is a situation where placing a piece of wood under the stand may help to add stability and prevent damage.

Lastly, if you are storing a car on jack stands for a long time, make sure that the vehicle is in a safe location where it cannot be inadvertently bumped or otherwise disturbed.

Is it Safe to Put a Car on 4 Jack Stands?

Provided the before-mentioned precautions are taken, then it is completely safe to place a car on four jack stands. When working underneath a car, even one on jack stands, care should still be taken.

For example, jack stands are released by a small lever on the side of the stand. It is a good practice to always have this lever facing outwards, away from the car. This is an important habit for two reasons. First, it allows you to release the jack stand without putting your arm or hand in danger by being under the car. Further, it greatly reduces the likelihood of the lever accidentally being hit, which could inadvertently cause the vehicle to drop. On a similar vein, always use care to be aware of the position of your body to ensure that you do not inadvertently kick or disturb the stands.

Properly done, a car placed on jack stands should be just as stable as a car sitting on its own four wheels. With just a few small steps, working on your own vehicle can be a safe, economical, and enjoyable experience.

How to Remove Bosch Windshield Wipers

How Long Do Tire Plugs Last?

Can You Use Dish Soap to Wash Your Car? Find Out Here

Can I Bug Bomb My Car? Here’s Everything You Need To Know