How to Pop a Dent Out of a Plastic Bumper

So you’ve accidentally hit the meter pole with your car. Sounds like a Monday problem, but the good news is, it can be repaired. It may look easier said than done, but if your car circa the 1980s or newer, you may be able to fix it yourself.  Instead of breaking the bank at the repair man, consider trying a few popular methods to fix the dents yourself.

It’s important to make sure that you have a plastic bumper before proceeding. Most cars made after the 1980s are built with plastic bumpers as per safety regulations. If you have an older car, verify the make and model bumper type before continuing.You can usually find this information on the internet, or by asking your local mechanic. Once you know that your bumper is plastic, you are good to try one of the following methods to fix your dent.

Understand that most of these methods work best with the addition of heating or chilling the bumper. With that in mind, consider purchasing a good pair of work gloves to keep your hands safe from the elements.

For a quick, inexpensive fix with minimal elbow grease, give dry ice a try. You’ll need a solid pair of work gloves, dry ice, and a hair dryer for this method. You can purchase dry ice at most grocery stores and gas stations.

As the name would suggest, this method entails using boiling water to remove the dent. It’s as simple as it sounds. Before proceeding, make sure you have a good set of potholders, a large pot, and easy access to hot and cold water. This method uses both heat and chilling to work. 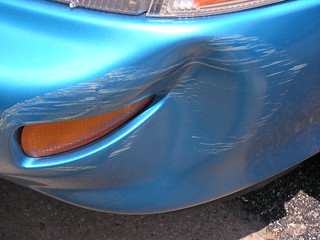 As hilarious as it may sound, using a plunger is a popular method for removing dents from a bumper. This method pairs well as a partner to the Boiled Water method.

You’ll need a plunger and boiling water for this method. You don’t have to purchase a new plunger, but it is highly recommended for the obvious reasons – no need to add a car wash to the to-do list, after all.

Follow the steps for the Boiled Water method through Step 2. Once you’ve thrown the hot water on the dent, take the plunger and adhere it to the bumper over the area with the dent. Give it a swift tug, and the dent should pull out.  Using the plunger is especially handy if you tried the Boiled Water method first and couldn’t give the dent enough of a push under the wheel well.

Continue on to Step 3 of the Boiling Water method by dousing the dent with cold water to finish the job.

Similar to the Dry Ice method, this particular option uses drastic changes in temperature to get the concave plastic to pop out to its normal shape. You’ll need either boiling water or a hair dryer and a bottle of compressed air, which you can purchase at any office supply or hardware store for under $5. Be sure and wear work gloves to keep your hands protected while using the materials.

It’s easy to get frustrated at having a dent in your bumper. The good news is that with a little quick thinking and some clever uses of household items, you can handle removing them yourself. Be sure and give these methods a try the next time you have a little fender bender to save yourself some time and money.

How To Remove a Deep Scratch from a Car at Home

How to Make a Fuzzy Steering Wheel Cover